Pokémon Legends: Arceus is the biggest Pokémon installment in quite some time, and as such, it can be a little daunting, even for experienced players. There’s a ton of stuff to track from new items and Pokéballs to Pokédex entries and updated Pokémon forms.

Here are some things I think you should keep in mind during your adventures.

Inventory space is a limited commodity in Pokémon Legends: Arceus, and the only way to expand the amount of stuff you can carry is paying fees to a Galaxy Expedition Team member that quickly become exorbitant. That’s why, whenever you have some time to catch your breath between battling Pokémon and hunting down rare species, you should pop over to a crafting bench (or, eventually, use your portable crafting tools) to condense those materials into more useful items.

Too many apricorns and tumblestones? Turn those two stacks into Pokéballs, which you probably have on you already. Grabbed a bunch of caster ferns while searching for wisps? You can combine those with spoiled apricorns and balls of mud to make sticky globs, the perfect item for stunning a Pokémon that’s grown too angry to catch. Heck, I’ll sometimes find myself crafting things I don’t even need just to free up space for a stack of items I’m not currently carrying.

If you tend to hoard, keep on top of it and you won’t be surprised by the game saying you’re lugging around too much shit as often. Wait for Pokémon to show you their backs

With so much to do in Pokémon Legends: Arceus, it can be tempting to rampage through the Hisuian countryside, throwing capture balls willy nilly at any Pokémon stupid enough to enter your line of sight. And while early on that method feels like the most effective route for catching a lot of Pokémon in a short amount of time, it quickly becomes clear that even moderately strong monsters will do everything they can to stay free.

Of course, Pokémon is all about disturbing nature as much as possible, so there are plenty of things you can do to make capturing “friends” an easier task. First and foremost, you should always approach Pokémon from behind. Hitting monsters in the back, you see, improves your chances of capturing them, and you even get a free attack if you start battles with a back throw. Pokémon Legends: Arceus lets you know you successfully hit a Pokémon in the back with a special, more dramatic sound effect.

All those different berries you’re carrying can also be used to distract your prey. If a Pokémon won’t look away from the tall grass in which you’re hiding, just toss one over its head, wait for it to turn around and start munching, and then throw that Pokéball at its butt. Monsters that eat razz berries will be even easier to catch. Other than that, you’ll want to follow the basic rules of capturing Pokémon from previous games if you get drawn into battle: lower their health as much as possible (the move False Swipe, which will never make a Pokémon with more than 1 HP faint, works wonders in this regard) and inflict status effects like sleep and paralysis.

Battles against wild Pokémon don’t end when you throw a Pokéball. Nope, those little suckers are going to do everything they can to break free. In previous games, this was indicated by a short animation of the Pokéball rocking back and forth that told you how close you were to actually catching the monster in question if it didn’t work that time.

In Pokémon Legends: Arceus, this whole process is shortened to play nice with the game’s more active gameplay loop, but you’re still going to want to keep a close eye on how your Pokéballs behave after throwing them. It’s all about how high the Pokéball gets off the ground while the Pokémon struggles. A short hop means you’re probably catching whatever’s in the capture device, but if it leaps into the air and seems to be venting a whole lot of steam, watch out, because you may need to try again.

This becomes super important when catching rare Pokémon, like alphas or shinies. When a Pokémon breaks free, you have a short window during which you can aim and throw another Pokéball. If timed correctly, you may even get a free back throw for your trouble. If you’re trying to catch something important, don’t run off until you’re absolutely sure that Pokémon is staying put.

The game doesn’t teach you this, but you can cancel throwing Pokéballs or Pokémon with a simple press of the B or Y buttons.

Not really much to elucidate here. B simply cancels the throw and returns you to a neutral state while Y cancels the throw with a dodge roll. If you square up a toss but realize a Pokémon has moved or the environment isn’t optimal, this is a great way to avoid wasting resources or scaring away potential captures. Pay attention to the turn order

Pokémon Legends: Arceus takes a page from fellow role-playing games like Final Fantasy X and Shadow Hearts: Covenant by showing turn order during battle. While Pokémon battles normally play out with a simple back-and-forth format, the addition of agile and strong style move variations or the ability to catch a Pokémon unawares means there can be moments where you or your opponent can take two actions in a row.

That said, turn order isn’t visible by default. During your very first battle in Pokémon Legends: Arceus, be sure to hit the Y button so as to not deprive yourself of this valuable information. The best part is that you only have to do it once for it to stick around for the rest of the game—well, unless you accidentally hit Y again, of course.

We’ve all been there. You’re running through an area with wild Pokémon, absent-mindedly traveling from point A to point B and wrecking whatever happens to crawl out of the grass. Maybe you’re also watching a TV show or YouTube video to pass the time as you hunt for shinies. Some moments in Pokémon games don’t require a whole lot of attention, but Sinnoh help the trainer who doesn’t keep a careful eye on their progress in Pokémon Legends: Arceus.

Just about every Pokémon you encounter in this spin-off, from early-game Bidoof to the giant, frenzied alpha monsters roaming the countryside, can seriously kick your ass if you don’t take them seriously. I don’t know why that is. Perhaps they were just more powerful before becoming widely domesticated. In any case, you’d be smart to approach every battle in Pokémon Legends: Arceus fully stocked with healing items as well as a few revives because, more often than not, you’re gonna take a beating.

Also, be careful starting Pokémon battles with multiple monsters around. More than one Pokémon can and will be drawn into battle against your solo partner if you’re not cognizant of your surroundings, which only exacerbates the chances of getting your shit pushed in. Stare down human opponents whenever possible

A cool thing about battling in Pokémon Legends: Arceus is that your trainer is given free reign to walk around a limited area while the mythical creatures are tearing each other to shreds. I like to use this opportunity, at least when I’m facing off against another Pokémon trainer, to walk over to their side of the battlefield and look them right in their eyes.

Does this provide any tactical advantages? Maybe a status effect for making your opponent nervous? Nope, not really. It’s just a fun thing to do.

Pokémon Legends: Arceus, more than any game before it aside from maybe Pokémon Go, encourages the capturing of massive amounts of Pokémon. Fortunately, it also gives you adequate room to store them all, but at some point, you’re going to have to get rid of a few. My tip: Wait until you fill multiple pages of the storage screen to make the process of releasing Pokémon a much simpler affair.

Upon topping off a fourth pasture, Pokémon Legends: Arceus gives you the ability to mass release Pokémon. The option to select dozens of Pokémon at once to send back into the wild is so much better than doing so one by one but, again, this isn’t something Pokémon Legends: Arceus announces with fanfare. It just sorta happens and it’s up to you to notice the little button prompt at the bottom of the screen.

Take it from me, it’s much better to let those Pokémon accumulate for a bit.

Don’t be afraid to release Pokémon, either

The other side of the coin, naturally, is seeing how much room you’re given to collect Pokémon and being wary of releasing them at all. That’s also a bad idea!

Every time you release Pokémon, whether solo or in a group, they leave behind little presents for you. I don’t know if these gifts change further into Pokémon Legends: Arceus, but over the first few hours of my adventure, I’ve collected a buttload of grit dust, gravel, pebbles, and rocks, all of which are used to improve secondary Pokémon stats known as effort levels.

Like EVs (effort values) and IVs (individual values) before them, effort levels aren’t something you need to concern yourself with if you’re just playing Pokémon Legends: Arceus casually. But those of you who prefer to min-max your role-playing experience, you can read more about the process on wonderful Pokémon info repositories like Serebii and Bulbapedia. Then again, with even normal enemies being pretty tough, it might be smart to think about utilizing effort levels sooner rather than later.

You can turn off the HUD

Do you feel like the Pokémon Legends: Arceus screen is too cluttered? Well, you’re in luck, because nestled within the settings menu is an option to enable HUD toggling.

After turning this feature on, all it takes is a simple click of the right thumbstick to get rid of all the UI elements clogging up the screen, perfect for taking pictures of the game’s lush countryside and wild Pokémon.

Another photography tip: holding the left trigger puts you in first-person mode, another great way to get up close and personal with your Pokémon. For example, here are two alpha Bidoof that I caught one after the other last night. They are my large sons. 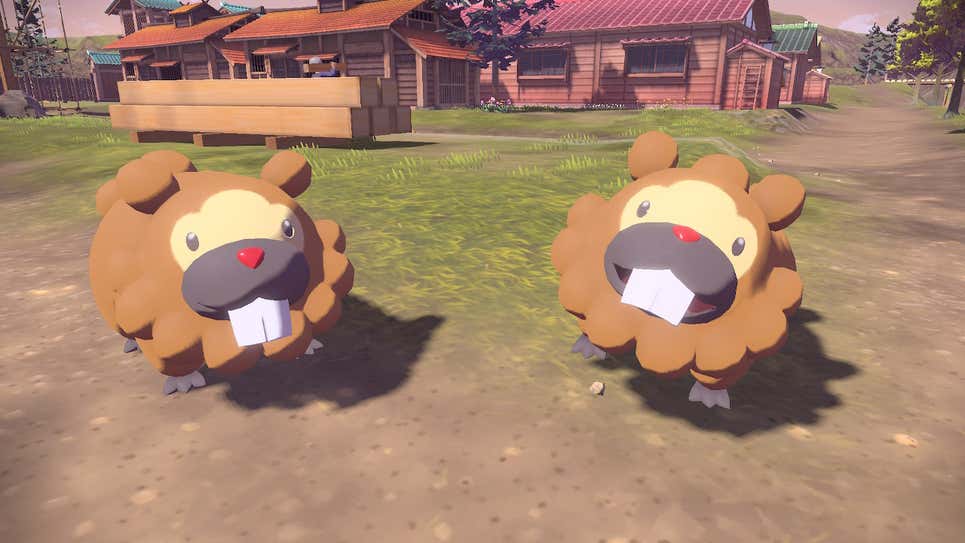 You’ve probably noticed already, but Pokémon Legends: Arceus is huge. There’s no reason to rush through it.

My last tip for this wonderful game is to savor it. Enjoy the adventure. Spend an hour here or there between story missions to wander through one of the game’s many areas, watching how wild Pokémon interact with their environment. Take out your favorite Pokémon in town and snap a few photos of their interactions. Before you know it, the adventure will be over, you’ll have collected a full Pokédex of shiny, alpha Pokémon, and there won’t be anything new to see until the next game.

Pokémon Legends: Arceus is a game decades in the making. It really does feel like the culmination of everything the developers have learned since the series debuted in 1996, not to mention something of a love letter to fans who have long asked for a more open-ended, organic Pokémon experience. Sadly, we’ll only get to see it for the first time just once, so do everything you can to cherish these moments of unknowing.

The Legend of Zelda: Breath of the Wild SWITCH NSP [DLC/Update]